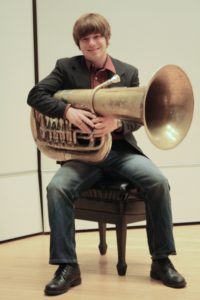 Dave has been Tubist with the orchestra for three seasons. He is a native of Albion, NY and was graduated from SUNY Fredonia in 2012, with a degree in Music Performance. In addition to the GSO, Dave plays with several groups in the Western New York area, including the Batavia Concert Band, The Hitmen Brass Band from Rochester, and The Easy Street Big Band out of the Buffalo area.

Hollenbeck has auditioned for several musical organizations over the past several years, many of which have been military bands. Dave relates, “I’ve had the chance to catch a few of the various service bands live, and have always been blown away by the incredible performances. I’m excited and honored to be offered a chance to join them.”

Dave leaves for Basic Combat Training at the end of June. He will continue his training with nine weeks at the Army School of Music beginning in September. After  graduation, he will be placed in one of the several Army Bands.

To learn more about the United States Army Bands visit their website at http://www.music.army.mil/.

The GSO mission – to link a diverse public with the arts – is paramount to everything we do. From their annual Meet the Orchestra event to the Young Artist Competition and String Workshop, the GSO engages the community and brings a distinct awareness of the arts to our rural region.