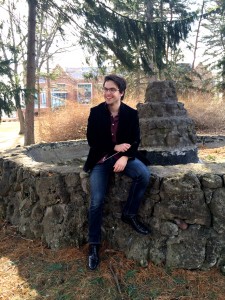 S. Shade Zajac is a freelance conductor, composer and cellist. In the Spring of 2016, after serving as a guest conductor in 2015, he was appointed as Principal Conductor and Music Director of the Genesee Symphony Orchestra in Batavia, New York. His inaugural season will begin in October of 2016.

Mr. Zajac has conducted the Nazareth College Chamber Orchestra, Nazareth College Symphony Orchestra and the OpusWerkes No.2 on numerous occasions. He was a student of Professor Nancy Strelau and was a guest conductor of her orchestra, the Greater Rochester Women’s Philharmonic. Mr Zajac was recently awarded the Paul Vermel 2015-2016 Apprenticeship with the Northwest Symphony Orchestra in Chicago, working with Maestro Kim Diehnelt. He was also accepted as a Fellow in the BCO December 2015 Workshop under the direction of Maestro Markand Thakar, where he conducted the Baltimore Chamber Orchestra in selections such as Samuel Barber’s “Adagio for Strings”. In the spring of 2016, Mr. Zajac was an active participant in the 8th Ithaca International Conducting Master Class with Maestros Donald Schleicher and Dr. Jeffery Meyer. He led the Ithaca College Chamber and Symphony Orchestras in performances of Berio’s Folk Songs for Mezzo Soprano and Orchestra, and Mahler’s Third Symphony.

A prolific composer, Mr. Zajac has written music for solo cello (commissioned by Prof. Mimi Hwang), a cello sonata, piano concerto, violin concerto, seven string quartets, and pieces for percussion ensemble, chamber groups and orchestra. In April, he completed his first symphony, which he dedicated to his teacher Nancy Strelau, conductor of the Greater Rochester Women’s Philharmonic and the Nazareth College Symphony Orchestra. Professor Strelau plans to premiere the piece with the two orchestras in the coming seasons.

Mr. Zajac is founder of the Finger Lakes Summer Festival, producing events that include chamber music and orchestra performances. Emphasis is placed on raising funds for charities and offering classical music to communities in upstate New York.

The GSO mission – to link a diverse public with the arts – is paramount to everything we do. From their annual Meet the Orchestra event to the Young Artist Competition and String Workshop, the GSO engages the community and brings a distinct awareness of the arts to our rural region.